This is going to be more of a "here's what I've been working on" blog post, rather than about one specific project in general. I have plans to upload some new items to my Etsy shop today, as well. You may even see one of the experiments go up if I have a chance to photograph it.

I don't mean to lead anyone on, but one of the projects I'm currently working on involves the making of small evening bag sized chainmaille purses. To start off, I'm creating the first one in stainless steel because of its strength and ability to resist rusting. If the first one is successful, I may consider creating others out of titanium, to make them lighter, but still strong and rust resistant. I doubt I'll ever go to sterling or gold-fill unless someone specifically requests one.

Yesterday, I was experimenting with a polymer clay idea. Actually, I was surfing the web and was inspired by something I saw online. I decided to try something with the basic concept in mind and was met at first with total failure. Heh, heh. Ahh, the best laid plans, as they say! What happened, you ask? Well you certainly don't think I'm going to leave you hanging, do you? Of course not!

So my experiment began with mixing a custom blend of polymer clay--I was going for a translucent look, and so used a small amount of colored clay blended with translucent. No big deal. I also blended in a fair amount of mica powder, because I wanted a pearl-y sparkly look to the finished piece throughout. No problems there either. I rolled it out, cut my shape and began doing detail work, which involved embedding some gold-filled wire and other components into the piece. All went well. Where things went horribly wrong was in the baking. Oh yes. I have only ever burned polymer clay once! Well, after yesterday, make it twice. But this was unlike anything I'd ever seen. It literally turned BLACK. But the most interesting thing happened when it did that -- the mica powder mixed with the bubbled black surface of the clay turned into what looked very much like antique gold! Huzzah! I have yet to actually do anything with this very interesting looking "failure", but I'm sure I will.

Later in the day, I used some of the leftover of my pre-mixed clay and re-made the piece. The baking this time went fine, as I watched it nearly the entire time and checked that the temperature on my clay oven was set a bit lower (I often forget it tends to be a little hot).

I was able to complete the new piece in the way I originally intended, and it turned out beautiful! I'm very happy with the results. Expect to see this piece possibly land in my Etsy shop sometime today. ^_^ 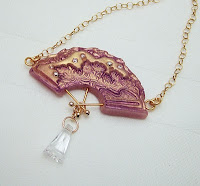